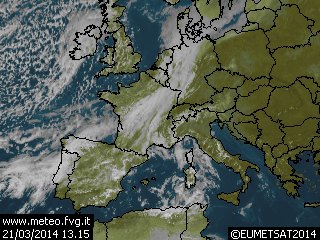 General Situation:
On Saturday the region sees the arrival of humid Mediterranean currents, followed by a rather intense Atlantic front on Sunday. The anticyclone is preceded by Sirocco, and followed by colder air entering from Austria in the evening.

Forecast:
Coast: A variable cloudy sky and moderate wind blowing between southeast and southwest; a chance of rainfalls. Sirocco becomes stronger in the evening.
Friuli Venezia Giulia Region: A variable cloudy sky with scattered and more frequent rainfalls in the afternoon, long-lasting on the Giulie Prealps, where the sky is mostly overcast. Southern moderate wind on the coast. From the evening on, widespread rainfalls, generally abundant on the mountains, with the freezing level over appr. 1,700 m, moderate rainfalls on the plain. Stronger Sirocco on the coast.